Jockey Tommy Berry is celebrating his third win in the Group 1 $3.5 million Longines Golden Slipper (1200m) after guiding the Richard & Michael Freedman-trained colt Stay Inside to a professional win in the world’s richest race for two-year-olds. 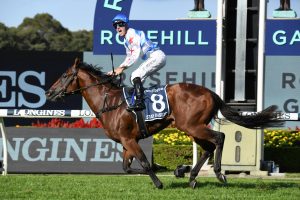 Having improved greatly over the past week, nicely-bred Extreme Choice colt Stay Inside went out as the second elect in markets for this year’s Golden Slipper and was dominant late in his two-length victory at Rosehill Gardens.

After being ridden to perfection tracking around fourth in the run as the favourite Profiteer led the Slipper field around, Berry made his move aboard Stay Inside on the straight with the young horse displaying a sensational turn of foot.

He charged home the last 100m to take his record up to three-from-four and atone for the lead-up fourth behind Anamoe in the Group 2 Todman Stakes (1200m).

It was Godolphin’s Todman Stakes winner Anamoe who presented as the late danger in the Golden Slipper at big odds, the talented Street Boss colt coming from well back off the wide gate to flash home for second and stamp himself as one to watch in the future.

There was more of the famous Royal Blue colours found in the Golden Slipper trifecta as Anamoe’s stablemate, Neds Blue Diamond runner-up in Melbourne two back, Ingratiating ran third in another feature race placing.

Berry’s two previous Golden Slipper winning rides had been for the prolific Gai Waterhouse with Overreach (2013) and Vancouver (2015).

He was absolutely thrilled to secure a third, this time for his good family friends including co-trainer Michael Freedman.

“Just having that association with Michael, he’s been a good family friend when (my brother, fellow jockey) Nathan passed away.”

Michael was also emotional after the Golden Slipper result, saying he felt like the often openly teary Chris Waller, and was quick to pay homage to Berry’s brilliant ride.

“Tommy rode him to absolute perfection. He got him into the perfect spot, conserves his energy and he’s got that wicked turn of foot,” he said.

As for Stay Inside, Freedman described the up-and-comer as the “real deal”.

“He’s just such a professional,” he said.

Stay Inside and Anamoe have now firmed into equal $4.60 favourites for a potential rematch at Royal Randwick on April 10th in the Group 1 $1 million Inglis Sires’ (1400m).