There could be a huge overhaul to markets for Saturday’s Group 1 $1.5 million Neds Blue Diamond Stakes (1200m) with the news that hot favourite Enthaar is having issues with lameness ahead of the two-years-old classic. 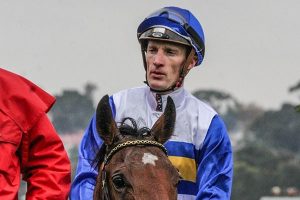 Jockey Mark Zahra is sweating on whether his mount Enthaar will pass a vet check on Friday morning ahead of the 2021 Neds Blue Diamond Stakes. Photo: Ultimate Racing Photos.

The undefeated daughter of Written Tycoon was one of three juveniles in the Blue Diamond Stakes field found to be lame on Thursday and ordered for another examination by Racing Victoria vets on Friday morning.

She along with another well-supported filly Dosh, along with Lloyd Kennewell’s outsider Marine One, were all found to be lame in the near fore leg.

Trainers Ciraon Maher & David Eustace are now sweating on the vet check on Blue Diamond Stakes eve for Enthaar who remains the clear $2.35 top elect in markets at Ladbrokes.com.au despite the concerns.

Winner of Sydney’s Group 3 Gimcrack Stakes (1000m) on debut last October, the filly returned to racing at Caulfield late last month and powered home for an over two length victory in the Group 3 Chairman’s Stakes (1000m) to stamp herself as the one to beat in Group 1 company this campaign.

“Definitely walk on eggshells the week before because things seem to go wrong before Group 1s, no matter what horse or where the Group 1 is, things start to go wrong,” Maher’s assistant trainer Lucy Yeomans told Racenet, also confirming Enthaar had pulled a shoe on Thursday.

“We just hope for her to run well and come home safely.

“We think we’ve got the best horse in the race.

“We’re as confident as you can be going into a Group 1.”

Mark Zahra is also sweating on the news of whether or not the filly will be passed fit to run as the hoop chases his maiden Blue Diamond Stakes trophy.

Another undefeated filly also now in danger of being scratched from the Blue Diamond is the Grahame Begg-trained Dosh, currently rated $17 through Ladbrokes.com.au.

The Rich Enuff chestnut won her career opener during Flemington’s Melbourne Cup Carnival in the Group 3 Ottawa Stakes and then enjoyed a half-length win in the Group 3 Blue Diamond Preview (Fillies) over 1000m on Australia Day.

The Blue Diamond Prelude winning filly Arcaded is also accepted for the major on Saturday, Godolphin’s gun daughter of Street Boss yet another with a flawless two-from-two record ahead of her test against the colts and geldings.

While Enthaar drew out wide with barrier 14 (of 16) for the Blue Diamond, Arcaded has the inside running from barrier one with Damian Lane to ride and pays a generous price of $16 to do the double.

The Prelude winner out of the boys’ edition, General Beau, also returns chasing not just the double but the Blue Diamond treble with the Mathew Ellerton & Simon Zahra-trained Brazen Beau colt having also won the Preview.

General Beau is the early Blue Diamond market mover through Ladbrokes.com.au backed into $6, while there’s also been a tickle for the James Cummings-trained Anamoe ($7.50) coming off a second in the Prelude.