Wapiti rallied late in the Group 3 $128,000 Winx Guineas (1600m) at the Sunshine Coast on Saturday to hold off the challengers and come away with a nice win for local horseman Gary Duncan. 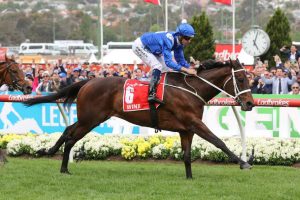 It was a massive Winx Guineas result for the Caloundra-based Duncan who also trained third past the post, Love Express, with the Tony Gollan-trained Knight Mariner between his duo in second spot.

Out wide the well-backed favourite Wapiti was best out the barriers settled second up on a slow speed set by roughie shot Two Smokin Barrels.

With no pace in the race, Wapiti went to the outside on the turn and hit the lead while stablemate Love Express loomed the danger at the furlong.

Also running on well from the back was Knight Mariner chasing a third win on the trot, the trio making a line of three across the field in the closing stages.

Despite looking like he would be run down and finish top three at best, Wapiti really dug deep and lifted, coming away for a three-quarter length victory in the end for the horse Duncan affectionately calls “Moose”.

“He’s had outside barriers, hard runs, he’s never run a bad race in his life. Today he’s come back from 2000m and that helped him at the end of the race.

“I knew he’d be a bit dour…and I thought Love Express had him for a while! He’s not a bad little horse either.

“I’ve always called him Moose, he’s got a head like a moose!”