Mr Quickie walked away with the spoils at Caulfield on Saturday thanks to a brilliant ride from Jamie Kah in the Group 1 Toorak Handicap over the mile.

A capacity field of gallopers lined up to grab a piece in the $2 million prize-money, only to be blanked by the five-year-old son of Shamus Award, who was paying a whopping $26 with Ladbrokes bookmakers.

Unlike many that have ridden him before, Kah managed to get Mr Quickie to jump cleanly from the gates before establishing a spot behind the speed.

From there, the pair grabbed a gap over the final furlong to wear down the leading Buffalo River, who drifted out to $5.00 late in betting.

Mr Quickie had won previously over the mile and always looked a decent each-way bet coming off a freshen up.

The five-year-old returned in good order to find the money first-up in the Group 1 Memsie Stakes, before finding the 1800m in the Underwood a stretch too far when seventh behind Russian Camelot.

It had been exactly 489 days since Mr Quickie last won a race, but that it appears Kah is sold on the talented galloper following Saturday’s convincing win. 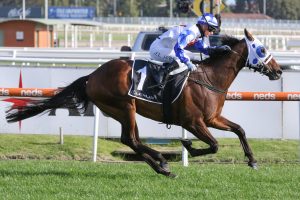 Mr Quickie has firmed on to the first line of betting ahead of the Kennedy Cantala following Saturday’s Group 1 Toorak Handicap win. Photo: Ultimate Racing Photos.

“He’s just been doing a few things wrong this boy, he’s not been jumping and sort of giving them too much of a head start, which you can’t be doing in these races” Kah told racing.com.

“He’s just such a talented horse on his day and they’ve found the trick with him keeping him fresh, so I’d love to stick with him now.”

Trainer Phillip Stokes has now set his sights on the $1.5 million Group 1 Kennedy Cantala over the mile at Flemington on October 31, and it appears bookmakers fancy Mr Quickie a chance with the five-year-old firming into $7.00 behind the favourite Wichita.

“Definitely, we’ll keep him fresh now and go to the Kennedy Cantala mile raced on the last day of the Carnival, it’s good to see him back,” Stokes said when asked about racing over the mile in the future.

Buffalo River set a cracking pace from the front on Saturday and lost no admirers running second in his first run at Group level.

Superstorm and William Pike also turned in an eye-catching run along the rails after finding themselves dead last rounding the turn to run third.