The Group 1 $2 million Victoria Derby (2500m) back at HQ in October is the likely spring aim for the very promising Cherry Tortoni after the juvenile secured his third career win from as many starts in the Listed $120,000 Taj Rossi Series Final (1600m) at Flemington. 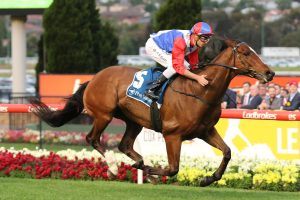 Cherry Tortoni has family ties to dual Sydney Cup champion and 13-time Group 1 winner Tie The Knot with his dam being a half-sister to the great racehorse.

The spring three-year-old staying features then look ideal for the up-and-comer who was impressive again late from an off-pace ride in the Taj Rossi Series Final.

Stepping up to the mile for the first time, the well-supported favourite was smooth out of the gates and allowed to sit back getting into his rhythm with Billy Egan patient in the saddle.

Egan, who celebrated his 100th win for the season, had to wait a little longer than perhaps he wanted to travelling strongly at the back, but the ability of Cherry Tortoni saw the horse quicken late despite the big kilos and charge home to hold off the late challenge by the Godolphin-raced Alcyone.

Alcyone is another potential 2020 VRC Derby horse in the making, the James Cummings-trained galloper being a son of former Oaks champion Purple.

Rounding out the Taj Rossi Series Final trifecta in an eye-catching third was Johnny Get Angry, the 100/1 roughie atoning for his second last (13th) on debut behind Cherry Tortoni at Flemington last start.

He had subsequently transferred from Leon & Troy Corstens to former AFL coaching legend Denis Pagan who celebrated a Black-Type placing with his first ever runner.