The punters were spot-on in The Roses 2020 results at Eagle Farm on Saturday with the heavily-backed Vanna Girl for Toby & Trent Edmonds brilliant again with another feature race success. 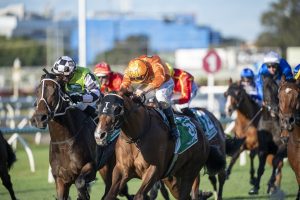 Vanna Girl, a stablemate to Stradbroke winner Tyzone (pictured), was too good for her rivals in The Roses 2020 results. Photo: Steve Hart.

The stable came up trumps last Saturday in the Group 1 Stradbroke Handicap won by Tyzone and were in the winners’ stall again seven days later with their Husson filly Vanna Girl saluting as favourite in the Group 2 $175,000 The Roses (1800m).

She had won six of her previous nine starts ahead of the Group 2 including her last three on the trot and back-to-back Listed Doomben races over the mile.

Stepping out over the 1800m for the first time and drawn out wide in gate 12, Vanna Girl was given a peach of a ride by Brad Stewart who got her into the perfect position within the first 100m settled around fourth last.

Switching off well, Vanna Girl allowed the front runners to do the hard work before coming around the widest of the fillies on the turn for home.

When asked, the hot favourite quickly rounded up her rivals charging home down the outside and hitting the line strongly for a one and a quarter length win over the Kelly Schweida-trained roughie Cellarmaid ($31).

Mark Newnham’s Hinchinbrook filly Celestial Falls ($5) settled for another placing rounding out the trifecta in third on the back of her second to Vanna Girl in the Listed Pam O’Neill Stakes on May 30.

“She won that pretty soft in the finish, there’s something about this filly she’s just got another gear that these three-year-old’s don’t have, I knew at he 600 i was on the winner,” winning jockey Stewart told the media after the race.

“First time i rode her she was a bit keen but today they ran along and she was much more comfortable, you never panic on her because you know when you ask for an effort it’ll be there.

“It’s a shame she goes to the paddock now with winning form but she’ll only come back better I can see her covering the two furlongs with ease.”

The sky looks the limit for Vanna Girl now who, without a Queensland Oaks in 2020 to contest, could go straight to the paddock now ahead of a big spring return.

“Just a huge effort from this filly to come here today and win the way she did, this was always her grand final and despite the success we’ve had this preparation we wanted to finish on a good note and she’s done just that,” co-trainer Trent Edmonds said.

“She’s a rare mix of talent and toughness and the scary thing is she’s not fully there yet once she really fills out the skies the limit with her.

“She’s been incredibly durable being up since October with only three weeks off in that time full credit to the staff at home who do a great job with her.

“We’ll head to Melbourne when we bring her back, we probably don’t want to aim too high too early but she’s shown she’s a cut above up here and has earnt [sic] the chance.”

“She’s a special horse the things she can do on the track and we’ve got a lot of family involved in the ownership she’s taken us on a hell of a ride so far.

“The stable success is great but that’s on the back of three, four, five years of working to get the talent in the barn we have at the moment.”