A quality field of sprinters stepped out over the 1200m at Morphettville on Saturday to contest the Group 1 Robert Sangster Stakes, but nobody was expecting $41.00 roughie Bella Vella to emerge first past the post.

The Will Clarken-trained five-year-old was looking to make it three wins in a row following a first-up at Moonee Valley and a second-up win at Morphettville Park over the 1000m. The rise in class looked to be too sharp for many punters though, leaving jockey Todd Pannell with plenty of work to do from the wide draw amongst two of the countries top fillies in Sunlight and Away Game.

Pannell made a quick decision to ride up on the speed and got away superbly from the barriers to establish his spot. From there, the pair led for the entirety to hold off a fast-finishing Lyre who flashed home down the outside. 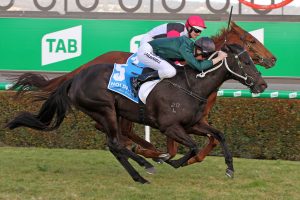 Bella Vella was originally purchased for $20,000 and, despite the odds on Saturday, had enjoyed some success for the Clarken stable. The filly had won eight of her 27 starts coming in to the Sangster, although the step up to the 1200m for the first time did pose a query.

“I’ve had lots of runners in Group 1’s and I suppose you’ve just got to keep rolling the marble,” Clarken said of the distance.

Bella Vella had previously been retired to stud to the owner of Criterion, but returned to the races when he was deemed infertile.

“She was previously owned by the owner of Criterion and went to meet him, but he was infertile so we brought her back to the track and the rest is history now” Clarken went on to say.

The win also marked Pannell’s second-ever Group 1 victory, but he may have to wait a little while to get back on the mare with a trip to the paddock up next.

“We’ll just let her have her time now” Clarken said when asked on potentially heading to The Goodwood in a fortnight’s time.

“She’ll come back for the Moir, this is a race that we thought was more appropriate. We’re just happy to get the win today. Everything she had in her she gave to us and I think she deserves the time now.”

Sunlight was one of the first beaten on Saturday, while Away Game failed to place despite the light weight.