2020 Queen Of The South Stakes Results: Shrouded In Mist Wins From Barrier to Box

The Tony and Calvin McEvoy-trained Shrouded In Mist has recorded an all the way win at Morphettville to take out the Group 2 Queen Of The South Stakes (1600m) at big odds.

Jockey Barend Vorster last rode the mare back in December where the pair finished second in a Benchmark 80 race over the course and distance. The five-year-old had since returned to win first-up over the 1400m before a lacklustre effort second-up at Morphettville Park on March 21st left  Shrouded In Mist at $21 odds on Saturday. 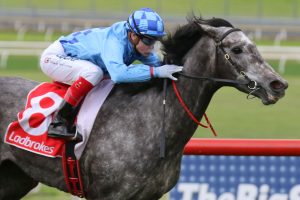 Shrouded In Mist is now a two-times winner over the mile at Morphettville. Photo: Ultimate Racing Photos.

Taking over from Lachlan Neindorf, Vorster chose to try a different approach by sitting up on the speed from wideout. Shrouded In Mist took up the lead from Snogging early on and didn’t look back kicking away from Seabrook over the final 100m to win by half a length.

“I’m a bit surprised, I didn’t quite think this mare was in the right form” Tony McEvoy said after the race.

“I’ve got to say a big thank you to my co-trainer Peter, the owner of this mare. Peter was very keen to run on this race and she didn’t have the form I didn’t believe to run in this race, I was a bit keen to run her in the Listed race today, but he was very strong, and I thank him very much now.

“He was keen to put her forward in the race and we went to the stewards. Even though she didn’t jump cleanly Barend went on with that and she got quite an easy lead and it was a good effort.”

The win marked Shrouded In Mist’s second in seven starts at Morphettville and her fourth over the mile.

Seabrook raced on well for second but failed to capitalise on the inside run. Snogging held on for a brave fourth after sitting up on the speed, but nobody came close to matching Shrouded In Mist.

“She was third in a Balaklava Cup, she’s a pretty good mare. We’ve kept targeting these races because Peter’s a breeder and now for her to win this Group 2 race, that noise you can hear is the champagne corks popping” McEvoy said.