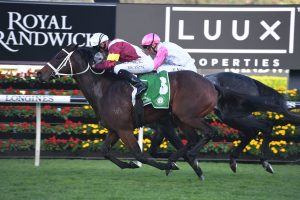 Waller has now won every major Queensland staying race after Ocean Park five-year-old Another Dollar, ridden to perfection by Luke Dittman, got the money in the Premier’s Cup results.

The recent Gosford Cup winner atoned for a somewhat flat performance at Eagle Farm a fortnight ago when seventh to stablemate Brimham Rocks in the Group 3 Tattersall’s Cup (2400m).

Somewhat of a Doomben specialist having run out of the money just once in nine starts at the track now, Another Dollar relished a return to her preferred Brisbane course and the give out of the ground in the Premier’s Cup.

Dittman had her travelling sweetly in a handy position fourth the outside of La Pulga who raced along third the fence throughout as the Waller-trained Satono Rasen led the field.

At the top of the straight Waller’s seven-year-old Aqlaam gelding Alward, who had moved up into second approaching the turn, presented as the danger and briefly got in front.

Another Dollar however was closing fast down the outside, while the Michael Costa-trained La Pulga was driving throughout along the fence.

Dittman surged late and Another Dollar ($5.50) was able to finish a quarter-length ahead of four-year-old La Pulga who carried 54kg to the winner’s 58kg equal topweight.

Alward off the on-speed run rounded out the trifecta one and a half lengths back for third behind his winning stablemate who could be aimed at next month’s Listed $200,000 Grafton Cup (2350m).

“I wasn’t on saddle duty with Another Dollar today, we obviously had great representation in the race and had all hands-on deck getting them ready and got the ideal outcome to come away with the win,” Waller’s assistant trainer Paul Shailer told the media post-win.

“Last start she was forced to go back from a wide barrier which probably didn’t suit her off a slow tempo, it wasn’t particularly quick today either but the win was aided by a great ride from Luke (Dittman).

“She takes a while to wind up and here at Doomben with the shorter straight we probably preferred a few of our other runners over here, but Luke had her sitting so close in the run she had just enough time to wind up and hit the line.”

“It was a real bit of astute riding from him late when she was fighting it out with La Pulga it looked like he switched the stick from his right to left hand which can often lift these stayers late.”

“She doesn’t win out of turn this mare, I actually told her owner she was probably up against it today but she goes home to Sydney with a Group 3 to her name.”