Instant Celebrity looks a massive chance for the Group 1 $1 million Schweppes Thousand Guineas (1600m) this spring after the Phillip Stokes-trained filly produced a special win in the Listed $100,000 Oaklands Plate (1400m) in Adelaide. 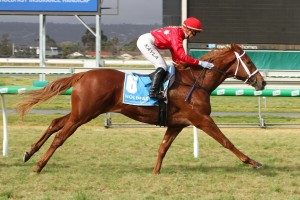 Having just her second start after a winning debut over shorter at Morphettville a month ago, the untapped daughter of Not A Single Doubt overcame all the odds to make it two-from-two in the Oaklands Plate at Morphettville Parks.

She was caught wide with no cover at the back of the field throughout and faulted on the home turn.

Despite having zero luck in the run, class rose to the top as Instant Celebrity produced a scintillating late turn of foot to run past the field.

Celebrating her 100th win for the season, jockey Kayla Crowther never panicked and simply had to hold onto the reigns as the $4 easing favourite did the rest.

An outstanding 400m – 200m sectional won the race and Instant Celebrity, despite tiring in the final 50m, held on for a three-quarter length victory over fellow backmarker The Brumby.

The trifecta, rounded out by Another Award, spaced the rest of the Oaklands Plate field including fourth-placed The Krone adding further merit to the eye-catching win.

“Today was super,” co-trainer Tommy Stokes told the media after the race.

“It didn’t go to plan but she was still too good.

“A super effort and a real credit to the team.

“I’ve got a really big opinion of this horse.”

Looking towards the Melbourne Spring Racing Carnival, Stokes confirmed the stable were eyeing a 2020 Thousand Guineas run for Instant Celebrity at Caulfield on October 10.

“It’s probably not the ideal preparation but we’ll really look after her and make sure it happens.”