2020 Missile Stakes Field Down to Six: Savatiano Among 7 Scratchings

Godolphin trainer James Cummings is in with just one remaining chance of back-to-back wins in the Group 2 $200,000 Missile Stakes (1200m) at Rosehill today after the stables Millie Fox Stakes winner Savatiano was one of seven scratchings from the feature race in Sydney. 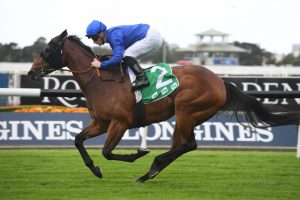 A Heavy (9) Rosehill track rating on race day morning has seen the Missile Stakes field ravaged by seven official scratchings with all the withdrawn horses to have raced first-up.

The shortest-priced of those in Missile Stakes betting at the time of withdrawal was Street Cry mare Savatiano, winner of the Group 2 Millie Fox Stakes (1300m) at the track back in February.

Cummings has also withdrawn the autumn’s Doncaster Prelude winner Cascadian leaving the stable’s Thousand Guineas winner Flit as the only chance to secure another win in the popular spring lead-up.

Drawn the rails with James McDonald to ride, Medgalia D’Oro four-year-old Flit makes her new season debut in the Missile.

She was last seen running a devastatingly close second to Splintex at Randwick on a Heavy (8) track back in April’s Group 2 Arrowfield 3YO Sprint (1200m) and is effective on all going.

Imaging is a proven mudlark having won the Group 2 Ajax Stakes (1500m) at Rosehill in mid-March on a Heavy (9) course and with a credible first-up record (6:2-2-0), shapes up as value in the Missile.

The narrow favourite still at the top of Missile Stakes odds is the Jamie Richards-trained Commands mare from New Zealand, Melody Belle ($2.80).

The ten-time Group 1 winning six-year-old resumes here looking to atone for the last start sixth to Addeybb in the Group 1 Queen Elizabeth Stakes (2000m) on April 11.

Prior to that she was only 1.4 lengths beaten when fourth on a Heavy (8) Randwick track in the Group 1 Doncaster Mile (1600m) that followed a host of elite level placings including a third in Flemington’s $5 million The All-Star Mile.

She’s two from four on Heavy going and has a Group 1 Empire Rose Stakes victory in Australia as part of her outstanding record.

“She does perform well on the wet tracks but she doesn’t need necessarily need it bottomless heavy first-up either. But she runs well in any conditions,” Richards told Racenet this week.

The danger according to the bookmakers is the Joe Pride-trained Eduardo ($2.90) down in weight after winning the July Sprint last time out.

Pride chases a third Missile Stakes success following his dual wins on non-successive years with Rain Affair (2012 and 2014) when the event only held Group 3 status.

The Hawkes Racing-trained wet-tracker Glenall ($18) rounds out the remaining runners and presents fit second-up off a July Sprint third to Eduardo.