Mirage Dancer capped off a huge day of upsets at Royal Randwick on Saturday by beating home short-priced favourite Mugatoo to take out the Group 1 Metropolitan over the 2400m.

The British import was on the short backup after finding the line for fourth in last Friday’s Group 3 JRA Cup under lights at Moonee Valley as jockey Nash Rawiller replaced Mark Zahra in the saddle.

Rawiller found daylight through the centre over the final furlong, which proved to be difference as the pair fought off Mugatoo to win by nothing more than a head bob right on the line.

Mirage Dancer was having his third run back from a spell and always appear a decent each-way bet after winning on the short backup earlier in his career.

Rawiller, who won The Metropolitan back in 2010 with Herculian Prince, was also the right choice to steer the Trent Busuttin and Natalie Young team into their sixth Group 1 win. 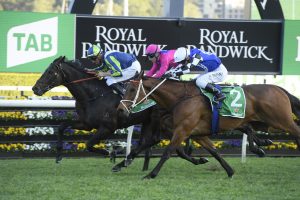 “He travelled like the winner the whole race. Gee he travelled nicely. I had a lot of horse at the home turn and I just sort of got on the right horses back in Tim Clark and Hush Writer and he just took me as far as I needed to go to get out and he did the rest. He is a very good horse” Rawiller said after the race.

Mirage Dancer could now head to the $5 million Caulfield Cup (2400m) in a fortnight’s where he remains a $26 chance, and with a Group 1 in his pocket, it appears the Busuttin team are heading that way.

“We thought the Turnbull would have been a bit stronger and we just thought that we wanted to chase that Group 1. He’s a Frankel stallion and he’s now a Group 1 winner in Australia. We were just mindful of that, trying to get a Group 1 on the way through to the Caulfield Cup.”

A trip to the first Tuesday in November is also on the cards with the seven-year-old war horse at 51-1 to win the Melbourne Cup.

Mugatoo stuck on well for second on Saturday but simply didn’t have the turn of foot carrying the extra 1.5kg.

The Irish raider was shooting for four straight after winning the Newcastle Cup last start but should take great improvement into the Caulfield Cup should trainer Kris Lees choose to head that way.