While he doesn’t appear in a lot of 2020 Melbourne Cup tips sheets, former Derby winner Warning has returned the efforts of a horse that looks ready to run a big race, and there is no doubt that he will relish a return to Flemington on Tuesday afternoon.

Warning has been an outstanding horse for Anthony Freedman and son Sam since making his debut at the end of the 2019 Autumn Carnival, and he experienced a meteoric rise to prominence last spring. 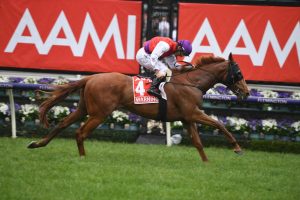 Having broken his maiden in the Listed Super Impose Stakes, the Declaration Of War gelding finished second behind Thought Of That in the Group 3 Norman Robinson Stakes before returning the biggest performance of his career to date; a near four-length domination in the Victoria Derby.

It is fair to say he didn’t quite live up to his billing during the Autumn Carnival this year, but he improved with racing and as he raced further out in trip, and ended his season third behind Russian Camelot in the Group 1 South Australian Derby.

He clearly needed the run, but there was a lot to like about the way he hit the line for seventh, just three lengths behind Fierce Impact in the Group 1 Makybe Diva Stakes at HQ when resuming this time, before another bold effort over 2000m in the Turnbull Stakes that saw him finish just a length behind Verry Elleegant.

It is fair to say that he was flat in the Caufield Cup.

He was caught behind a wall of horses at the top of the straight and was forced to go back inside, and while it was by no means an eye-catching, there’s no doubt that it was the run that he needed to bring him right on for the Melbourne Cup 2020.

When considering all 2020 Melbourne Cup tips, statistics and history of the race, Warning shapes as a key chance of winning, at a price.

Four-year-olds have the strongest winning record in the Melbourne Cup, and alongside Russian Camelot, Miami Bound, Persan and Tiger Moth (Northern Hemisphere), Warning is one of just five four-year-olds in the 2020 Melbourne Cup field.

He will leave from barrier 8, which has produced seven winners since they were introduced in 1924, just one less than the most successful Melbourne Cup barrier draw, barrier 5.

Warning will carry 53kgs, will be steered by Luke Currie and is currently available at 2020 Melbourne Cup odds of $51 at Ladbrokes.com.au.