Damien Oliver saddled the daughter of Fastnet Rock, and not for the first time, proved no match for the rest of the field winning the Oaks for the second year in a row.

After a brilliant ride last year aboard Miami Bound, Olly proved that patience really is a virtue by getting well back in his run before producing the filly late out wide.

With a cracking tempo set in the early stages, Oliver judged the pace enormously well to allow Personal’s explosive turn of foot to do the talking, beating home short-priced favourite Montefilia and a very brave Salto Angel in a swooping run to the line.

Damien Oliver you are the master. His 122nd Group 1.

Oliver, who also claimed his fourth win in the Oaks, said Personal was always set to peak in her grand final and was happy to give full credit to Dabernig and Hayes for a fabulous training job.

“It was a good tough effort, it was a real slug the last sort of 400-500m with the second and third horse, she hasn’t had a great prep and she hasn’t been able to win, but she won the one that mattered, ” Oliver told racing.com.

“She probably looked as tight as she has, she’s always been a lovely strong filly with plenty to work with, credit to Ben and Tom, they’ve done a lot of work with her and she’s really peaked today.”

Personal was installed as a $6.50 chance with Ladbrokes bookmakers, which may have been a touch overs considering not only Oliver’s outstanding record in the race, but also her performance when second to Victoria Quay in last Saturday’s Group 2 Wakeful Stakes (2000m).

The Wakeful has always been one of the strongest form lines heading into it the Oaks, but it appears co-trainer Tom Dabernig knew he had a smart filly on his hands following her second-up run when third in the Group 1 Blue Diamond back in February.

“If you watch her run in the Blue Diamond, I know it’s not relevant, but after the post she was actually in front, so she can sprint and stay and she’s got some magnificent attributes” Dabernig said after the race. 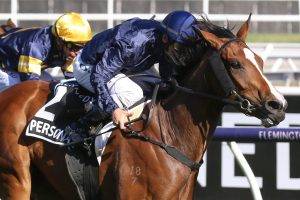 “I think we haven’t seen the best of her yet, I think there’s still more to come, but one day she’ll make a beautiful broodmare for the Coolmore team.”

After an all-out battle with Salto Angel, Montefilia came off second-best to run third – much to the chagrin of punters that took the $1.90 about her.

Miravalle was well-supported before the jump, but simply ran into some traffic down the straight and was unable to get clear in time.