Top Brisbane horseman Tony Gollan celebrated his second win in the Listed Glasshouse Handicap (1400m) at the Sunshine Coast on Saturday with quality mare Krone back in winning form. 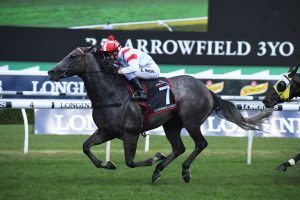 Gollan, who won the race for the first time in 2014 with Alma’s Fury, only took over the training of the four-year-old Krone this winter.

As a filly she defeated subsequent Group 2 Arrowfield 3YO Sprint winner Classique Legend, also sixth in The Everest results last year, in a Rosehill sprint in the went last March.

Enjoying her first turf triumph since with conditions to suit on a Heavy-rated Sunshine Coast track for Winx Guineas Day, Krone also relished coming back from 57kg to 54kg.

Jockey Taylor Marshall jumped aboard for the Glasshouse ride, Krone going one better than her strong second to Sure Knee on a Good (4) Doomben track in the Group 3 Sapphire Stakes (1630m) on June 27.

With the wet track and light weight, the mare got into the perfect position in transit fourth the fence behind triple-figure roughie Silent Flyer who was walking up front.

Once on the straight Silent Flyer quickly dropped out as Krone ($5) burst clear inside the final furlong, dashing to the front and going on to hold off Special Missile ($5.50).

In a brave third off the moderate tempo was backmarker River Racer ($3.80) in a nice effort 1.4 lengths off the winner, while Mark Currie’s $2.60 favourite Soxagon held for fourth after racing a little keen in third throughout.

“She’s been busting to win a race since we had her this preparation,” Gollan told Sky Thoroughbred Central.

“She’s a very good wet tracker. She’s been such a consistent mare her whole career.

“She’s a really honest mare that has been plagued by a lot of bad barriers throughout her career.

“She really did win quite well in the end.

“We’re thrilled with Roll The Dice to give us the opportunity to race a horse like this.”

Gollan confirmed Krone would be withdrawn from the Gold Coast Broodmare Sales with connections opting to race on for another year with her next major target being the $1 million Magic Millions Fillies & Mares (1300m) race next January.

“We’ll target the Magic Millions Mares race in the summer with her now,” he said.