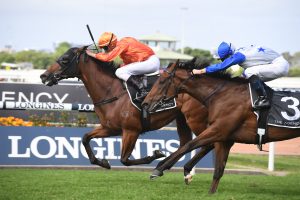 Jockey Nash Rawiller got away well to lead from Spend before quickening at the turn to race away from the pack. Another brave challenge from The Bostonian provided an exciting finish, but Dreamforce’s turn of foot did the talking over the final 100m to win by a short half head.

The Fastnet Rock gelding was a double-digit chance in Ladbrokes’ market despite having placed three times before at Group 1 level. Punters were happy to take the $1.90 about Te Akau Shark, but the two-time Group 1 winner found himself a little too wide heading into the straight before finishing third.

With Dreamforce only three runs into his prep, Thompson will now look ahead to the remainder of the Autumn Carnival with nominations in the Doncaster Mile (1600m) on April 4 at Randwick and the Queen Elizabeth Stakes (2000m) still to come.

For now, though, he’s happy to pay full credit to Rawiller for an extraordinary ride.

“He just had him in a nice rhythm today and when he can do that he gives a real good kick. Nash said to me before the race ‘if I’m travelling well I’ll get out into the better going’ and when he came out so wide I knew he was confident,” Thompson told Sky Racing.

“He’s been absolutely outstanding to me, he’s a champion and future Hall Of Famer, and he’s just an asset to my team.”

Meanwhile, the win marked Rawiller’s 61st Group 1 victory and his second in the George Ryder after saluting aboard Pierro back in 2013.

“He showed a lovely turn of foot but I really thought at the 100m that I was going to get beat. To his credit he lifted again and fought the other bloke off which was pretty thrilling,” Rawiller said of Dreamforce’s run.

There was no such luck for Opie Bosson however, who said after the race that the trip didn’t suit the Shark.

“The 1500m was probably just a little bit too sharp for him today.”

Te Akau Shark has drifted slightly in Queen Elizabeth Stakes betting from $3.80 out to $4.00.