2020 The Galaxy Results: I Am Excited Wins First Group 1 in a Photo Finish

Trainer David Pfeiffer added his first Group 1 to the resume on Saturday as speedy five-year-old mare I Am Excited won the 2020 edition of The Galaxy (1100m). In a capacity field made up of several fast finishers, it was jockey Tim Clark who found daylight down the Rosehill straight to see off the courageous Miss Leonidasin a photo finish. 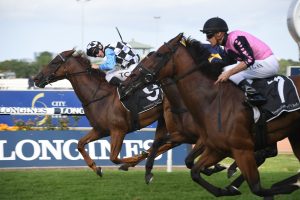 I Am Excited narrowly wins The Galaxy 2020 in a thrilling photo finish. Photo: Steve Hart.

A cracking tempo was set from the gates as Miss Leonidas and Billy Egan set the pace up front, right before the field spread wide coming out of the home turn. Clark came off the rails heading into the straight and took up clear running after moving past third placegetter Deprive over the final furlong.

The pair then found an extra kick over the 100m to win by a nose and showed much improvement after running second last start in the Group 3 Wenona Girl Quality (1200m) at Randwick. “She began well, and being nice and fresh, David freshened her up, it probably allowed me to be that pair closer which ultimately won her the race. She travelled great throughout. We just hit a patch before the turn where she falteredslightly but she picked herself back up and she was very brave and gave me everything she had” Clark told Sky Racing.

Saturday marked I Am Excited’s fifth start at Group 1 level after failing to run a place on all previous occasions. The Snitzel mare went around as a $26.00 shot despite drawing barrier 2 but always had the closing speed necessary to finish strongly. Clark’s win also happened to tie Peter Cook’s record of three wins in The Galaxy. He previous saluted on Typhoon Zed in 2008 and Atomic Force in 2011.

“The Galaxy was my first G1 and this is my third now so it has been a good race to me. Very privileged to be able to take it out again” Clark went on to say. As for the path ahead, Pfeiffer said after the race that he may target the Group 2 Sapphire Stakes (1200m) at Randwick on April 11 before journeying south to Morphettville for the Group 1 Sangster Stakes on May 2.

“She’ll probably go to the Sapphire then the Sangster, whether we stick to the plan or not we’ll have to see.”

Miss Leonidas was also impressive finishing second after leading from the barriers. Jockey Billy Egan said afterwards that this could potentially be the last we see of I Am Invincible mare

“Good run. Couldn’t be happier with her. I think that was her swansong, there was just one better than her on the day.”