The three-year-old daughter of Dissident was having just her second start at Group level and was installed at double figures after struggling to see out the mile two runs back in the Edward Manifold Stakes.

Williams managed to prove the difference though as the pair shot straight to the front before reeling off some cheap sectionals mid-race. Williams still held a steady lead rounding the final turn and found himself with plenty of horse underneath to kick clear and win by just under fourth lengths. 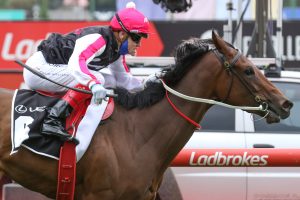 “I was really lucky, it’s all her heart and all her will. But full credit, not only to her, but all the staff, because he’s been up for a long time so they backed up seven days later and she delivered, good girl,” Williams told racing.com following the win.

Plenty of horses were struggling to make up ground on the rain-affected track, which favoured horses up on the pace early in the day.

Yes Baby Yes had also won previously on soft going and seemed to enjoy racing with the sting out of the ground.

The win also marked a milestone for Williams, who recorded not only his third Fillies Classic win, but also his 22nd Cox Plate Carnival victory to move into second all-time behind Damien Oliver.

Race favourite Ecumenical ran on for second after winding up out wide heading into the turn, while Miss Inbetween did well to find the money in what was her first look at Group level.