The market proved dead right at Royal Randwick on Saturday as the Les Bridge-trained Classique Legend won the world’s richest turf race, The Everest, in an absolute canter.

The five-year-old son of Not A Single Doubt had never made a start at Group 1 level but looked every bit a champion nabbing a slice of the $15 million prize-money thanks to another patient ride from Kerrin McEvoy.

Eduardo and Nature Strip set a cracking pace out front and appeared to have the race on their terms over the final 300m, right before McEvoy pressed the button to stoke up his ride and run past the lot.

“It was a funny one because I needed to come back behind Trekking to get a slot and then they went quicker. I just had to ride my race,” MvEvoy told Sky Racing.

“I looked up at the 600m and they were well in front, they were off. I thought ‘far out, if Nature Strip and his companions are back to their best they are going to take a bit of running down.”

The grey finished sixth in last year’s Everest behind Yes Yes Yes and was well-supported at $4.00 to go one better.

Classique Legend returned to the races in great order last month winning the Group 2 The Shorts at Randwick, before an equally impressive runner-up to Everest rival Libertini in the Premiere Stakes.

McEvoy, who won his third Everest after claiming the double on Redzel in 2017 and 2018, ranked Saturday’s victory just as highly. 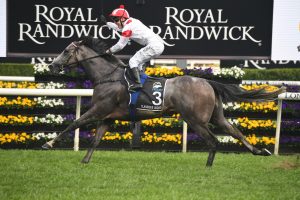 “Every big win is special. I was lucky enough to team up with Redzel soon after he got racing with the Snowden’s.

“This is a horse that Carmel (Size) threw me on and Les (Bridge) threw me on really early in his career and he showed instant brilliance. I backed him to the hilt from then on to win a good race. Last year was a tough call, I had to stick solid with Redzel and the Snowdens and this horse was a little bit unlucky.

“We’ve all been on the same page that the horse has come back bigger and better. It is extra special” McEvoy said.

Trainer Les Bridge could potentially line up in the $1.5 million VRC Sprint Classic (1200m) at Flemington on November 7, but it appears Classique Legend is now destined for a stint over in Hong Kong.

Newmarket Handicap winner Bivouac also made up a stack of ground to run on for second.