The Gai Waterhouse and Adrian Bott-trained Shout The Bar caused a boiliover at Flemington on Saturday by winning the Group 1 Empire Rose Stakes (1600m) in an absolute thriller.

Winning rider Damien Oliver claimed his 121st Group 1 win by mere millimetres ahead of co-favourite Odeum as the judges awarded the four-year-old mare her second Group 1 win after claiming the Vinery Stud Stakes at Rosehill back in March.

Oliver got his nose in front over the final 100m and proved the difference in the end, which in turn earned him not only his second Empire Rose win, but also Gai Waterhouse’s.

“It’s been a while, probably Fiorente is the last one I think. But it was great, it was a good effort, as I said on the pony, she didn’t fill me with a lot of confident during the week, but the track was a bit firm and all credit to Adrian, he suggested the blinkers and she fought back really well” Oliver said after the race. 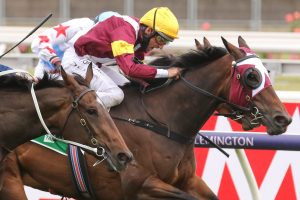 In the end, punters that backed the daughter of Not A Single Doubt at $31.00 were the ones that went home happy.

“Obviously what she did in her first campaign was quite special. To win a Group 1 in just her fourth career start, I think that was signs of good things to come” co-trainer Adrian Bott told racing.com.

Shout The Bar found herself at long odds in the market after struggling to find the same form that saw her burst onto the scene during the Autumn.

A disappointing first-up run when last in the Group 2 Sheraco Stakes (1400m) at Rosehill set the tone, followed by an equally luckless run over the mile in the Group 3 Angst Stakes at Randwick three weeks ago.

Like all good trainers though, Bott saw the positives in each run and always thought his horse was a chance.

“While she hasn’t sort of had the runs on the board this preparation, we were happy with the performances and it was good to see us really bounce back today, it was a good tough strong win” Bott went on to say.

Saturday’s co-favourite Mystic Journey was a letdown for punters that backed her into $2.70 before the jump.

The last start Stocks Stakes winner was having her fourth run back from a spell, but simply found no room on the back of Shout The Bar down the straight.

Thousand Guineas winner Odeum lost no admirers finding the money in her third consecutive start, while Forbidden Love stayed on well running third after leading from the gates.