The Listed $125,000 Gai Waterhouse Classic (1350m) at Ipswich on July 18 is on the cards for Jami Lady after the Steven O’Dea-trained mare led from barrier to box to win the Bright Shadow Quality 2020 on Saturday. 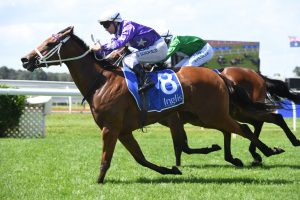 It proved to be anything but with Spirit Of Boom four-year-old Jami Lady ($6) bouncing from the gates to take up the lead and go all-the-way for jockey Boris Thornton.

Extending her record to seven wins from 19 starts and securing her second in as many runs at Eagle Farm, Jami Lady relished a drop back in weight off the 59.5kg she carried to victory over 1000m at the track back on Stradbroke Handicap Day a month ago.

She had just 55.5kg for the Listed Bright Shadow and absolutely bolted home under the light weight finishing two and quarter-lengths clear from Fiesta ($15), Chris Waller’s class mare brave late down the outside with 58.5kg to run second.

Just a neck further back for third was the Darryl Hansen-trained Pennino ($6.50) who narrowly held off Love You Lucy ($11), the Group 2 Dane Ripper Stakes winner rounding out the First Four.

O’Dea said it was a more mature Jami Lady on show in the Bright Shadow with the mare dictating terms up front and proving too strong for her rivals despite a previous tendency to over race when in the lead.

“She’s built a really consistent record and she definitely deserved a Black-Type win next to her name,” he told Sky Racing after the win.

“She’s been placed in stakes company before and probably I’ve always thought she’s a better horse with a sit and a little bit of cover but I think she’s matured now. She was able to take up the lead…she really controlled it in front and she was strong right through the line so it was really good to see her do that today.”

O’Dea went on to name the 2020 Gai Waterhouse Classic for the fillies and mares on July 18 for Jami Lady next race where the mare will be tested over the extra distance.

“We’ll head to the Gai Waterhouse now it will obviously be her first go at a slightly longer trip but as I’ve said, I think she’s definitely matured,” he said.

“She’s starting to relax a bit better in her races and probably a track like Ipswich will suit her.”