Samadoubt mapped as the leader heading into the race and jumped well from the gates to lead. Not for the first time in his career, Happy Clapper finished second in a race named after the mighty mare he famously chased for so many years.

First-up on Saturday, Samadoubt returned after winning a pair of races at Warwick Farm and Canberra earlier in the Autumn. After an impressive trial at Rosehill last fortnight, Baker always knew his horse was a chance, even if the bookmakers disagreed. 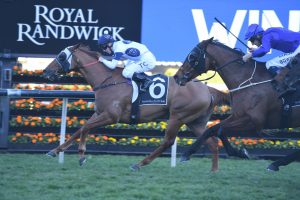 Samadoubt, above, is now a Group 1 winner after causing a massive upset in this year’s Group 1 Winx Stakes. Photo Credit: Steve Hart.

“Well, he won our great nation’s capital race the Canberra Cup. From Winx to Samadoubt hasn’t it got a good ring to it” Baker joked after the race.

“Look he’s been a good horse. He ran in the Breeders’ Plate as a 2yo. We left that day disappointed. He’s been a great ride with the owners up and down. We’ve done plenty of work with him.”

There was no such luck for race favourite Avilius, who found himself trapped second last at the final turn. With a wall of horses in front, Godolphin’s Ranvet and Tancred Stakes winner only managed to run fourth, but jockey Kerrin McEvoy still took plenty of positives away.

Likewise, Verry Elleegant, who returned following back-to-back Group 1 wins, also had no luck in the run. The wide draw certainly didn’t help, but nobody expected this year’s Vinery Stud and ATC Oaks winner to finish 10th.

“She’s returned ok. She’s just a bit more dour and I had a few concerns about that regarding today’s race” beaten jockey James McDonald said.

“Her work suggested she wants a mile, mile and a half. They are just a bit sharp for her now, I think even at a mile they might be a bit quick for her, especially against these tough older horses.”

As for Samadoubt, Baker is happy to bask in his second Group 1 win before making any plans for the future ahead.

“I’ve won two (Music Magnate 10,000/Samadoubt) but also one in partnership with Murray that I’ve got to claim. I do most of the work with those ones.” Baker said.