In-form hoop James McDonald celebrated his third win of Stradbroke Handicap Day in Race 5 at Eagle Farm when partnering the well-supported favourite Kolding for his powerful late win in the Group 2 $350,000 Ascot Green Queensland Guineas (1600m) earning talk of a shot in the $7.5 million Golden Eagle race this spring. 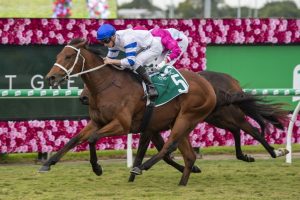 McDonald kicked things off in the first with a win on Signore Fox in the Listed $125,000 Daybreak Lover (1200m) before backing-up to take out the Group 2 $200,000 Dane Ripper Stakes (1400m) on the defending Chris Waller-trained champ Invincibella.

Waller and McDonald combined again in the fifth and posted another turf triumph, Ocean Park gelding Kolding taking his winning streak to four on the trot with a win for the punters in the Queensland Guineas.

Having his first look at the mile, Kolding came off an excellent 1.8 length Randwick win over 1500m from May 25 and continued that hot form in the sunshine state on Queensland’s biggest race day.

The top fancy in betting was caught wide and well back throughout the race as the Anthony Cummings-trained triple-figure roughie Agassi led the Queensland Guineas field around.

Once on the home straight however Kolding came flashing home, overpowering his rivals late in a slowly-run race.

That followed her lead-up second behind Military Zone as a $51 outsider in the Group 3 Fred Best Classic (1400m).

Hard luck story of the Queensland Guineas was the James Cummings-trained Pohutukawa, Blake Shinn luckless aboard the Group 3 winning Medaglia D’Oro filly who got held up around the turn before finishing third.

It was the second Queensland Guineas success in six years for owner Neville Morgan who took it out back in 2013 with Sizzling and he was thrilled to be back in the winners’ stall in Brisbane.

“Really, really happy to win one here. We’ve had a bit of luck down south, but not so much here. I think the last, we won this race with Sizzling a couple of years back so really pleased to win one here,” he told the Brisbane Racing Club.

Waller and Morgan will now be hoping Kolding lives up to his potential during the upcoming spring racing season and shrugs the hoodoo of Queensland Guineas winners with four out of the past five never winning another race.

“I think it’s well-documented that the gelding has improved him so we can only hope that he can come back in the spring and match up to the really good four-year-olds in the spring in races like the Golden Eagle and things like that,” Morgan said.

“I think Chris has got a really good opinion of him.”

The country’s newest race, the $7.5 million Golden Eagle runs for the first time on Saturday November 2 at Rosehill and is a set weights race for four-year-olds contested over 1500m.

Pre-nomination betting on the Golden Eagle 2019 at Ladbrokes.com.au are currently led by gun Pierro filly from Western Australia Arcadia Queen ($4) who last seen winning the Group 1 $1 million Kingston Town Classic (1800m) at Ascot by 4.5 lengths back in December.