The call from trainer Phillip Stokes to head to Queensland with beaten SA Derby favourite Mr Quickie proved the right move as the well-backed gelding saluted for the punters in Saturday’s Group 1 $600,000 Channel 7 Queensland Derby (2400m) on Stradbroke Day. 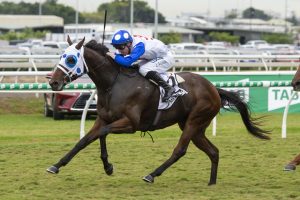 The consistent Shamus Award three-year-old celebrated his ninth win at start number 13 and handed Adelaide horseman Stokes with his first Group 1 win out of his recently relocated stable at Pakenham in Victoria.

“It’s a big thrill to get my first Group 1 winner out of Pakenham,” Stokes said post-win.

“We’ve hit the ground running. It’s a credit to my staff.”

He atoned at Eagle Farm Racecourse with a sensational three-quarter length victory, which was marred by the nasty fall of Kiwi visitor Lord Arthur who broke down badly shortly after turning for home throwing two-time Melbourne Cup winning hoop Corey Brown to the ground.

Brown was conscious after the fall but sent to hospital for further testing.

Michael Dee subsequently picked up the Stradbroke ride, Tom Melbourne a $31 outsider in betting at Ladbrokes.com.au.

Flying jockey John Allen celebrated his fifth Group 1 win for the season, the seventh in his career and fourth for Stokes with the Queensland Derby result.

Allen and Mr Quickie were not the best out of the barriers with a rough early start for a number of the horses.

It was the $101 roughie Trusty Lad leading the field around, Mr Quickie settled near the inside midfield after settling.

Mr Quickie looked in trouble on a couple of occasions getting shuffled back near the rails down the side as they approached the turn for home.

The favourite was soon off however getting the gap and hitting the lead 250m out from the line.

In a gutsy performance, Mr Quickie finished three-quarters of a length over the Danny O’Brien-trained Vow And Declare.

Jockey Damien Oliver on Vow And Declare lodged a subsequent protest over Mr Quickie and Allen alleging interference but was overruled.

Rounding out the Queensland Derby trifecta in third was the best finishing of the fillies, the Kris Lees-trained daughter of Hinchinbrook Aliferous.

She was backing-up on successive Saturdays after a fifth to Winning Ways in last weekend’s Group 1 $500,000 Queensland Oaks (2200m) when only 1.9 lengths beaten.

Stokes however is not tempted to take one of the likely big money offers to transfer Mr Quickie to foreign shores.