Sunlight stamped herself as one of the best sprinters in the country with a simply outstanding win in the 2019 Newmarket Handicap at Flemington this afternoon. 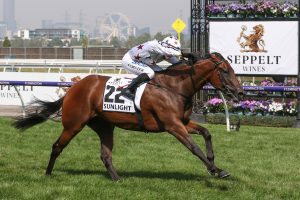 Sunlight claimed yet another Group 1 victory in the Newmarket Handicap. Photo by: Ultimate Racing Photos

Barend Vorster settled Sunlight right on the speed in the early stages of the Newmarket Handicap and it proved to be a winning move.

She fought-off Graff at the 400 metre mark and had enough left in the tank to hold-off Brave Smash and a flying Osborne Bulls in the concluding stages.

Sunlight was not beaten far in the Black Caviar Lightning Stakes three weeks ago and trainer Tony McEvoy revealed after the Newmarket Handicap that he always knew the Zoustar filly had plenty of improvement in her heading into this contest.

“She is an incredible filly isn’t she,” McEvoy said after the race.

“She keeps stepping-up to the plate and the further she gets into her prep the better she gets.

“I know the three-year-olds only get 50.5, but she is a three-year-old filly and she was taking on one of the best fields this race has seen.

“She has been a superstar up until today and she confirmed it today.

“She given us an amazing ride and she has been a pleasure to train.

“She blew up a little bit in the Lightning and the incredible thing with her, with her speed and her class, is that I haven’t been able to win first-up with her.

“She just takes the work, so we trialled her after the Lightning and that topped her off nicely for today.”