The wide barrier draw proved no problem for Lys Gracieux on Saturday as the Japanese favourite won this year’s Ladbrokes Cox Plate (2040m) in a canter at The Valley.

Yoshito Yahagi’s outstanding mare had big shoes to fill in the shadow of four-time Cox Plate winner Winx. With many champion horses looking to stake their claim, it was only fitting that the favourite put away the field with ease down the straight to record a comfortable one and a half-length victory.

Jockey Damian Lane added to his growing list of accolades by winning his third major race of the year. The win marked Lane’s first-ever Cox Plate victory as well as his 17th Group 1 win.

“Unbelievable. To grow up as a racing fan watching this race and watching my idols win this race, to now be on the honor roll is such a privilege” Lane said following Saturday’s win.

Lys Gracieux ran on strongly at the final turn before taking over the lead at the final 100m from Castelvecchio. The Japanese import showed a Winx-like turn of foot in the dying stages to grab a hold of the leader, but again, it was Lane’s patient ride in the early goings that saw the favourite over the line.

“The pace was on a lot more than I thought it would be towards the first corner. I just took my medicine and rode her back. She got a little bit keen when the pace came out of the race, but I was confident when I got her around the side. Probably didn’t get around the track quite as well but was just too good anyway” Lane went on to say.

The six-year-old by Heart’s Cry is the first Japanese horse to win the Cox Plate and the first international winner since Irish import Adelaide claimed the prizemoney in 2014. Punters came in droves right before the jump backing Lys Gracieux from $3.20 into $2.60 with Ladbrokes, and as we’ve seen in more recent years, the favourite didn’t disappoint. 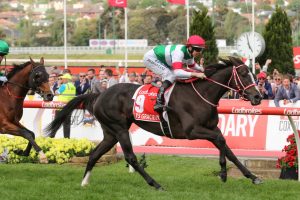 Japanese star Lys Gracieux lived up to the hype at Moonee Valley on Saturday by claiming the Ladbrokes Cox Plate as the favourite. Photo Credit: Ultimate Racing Photos.

“I honestly thought she wasn’t going to make it from there. Damian Lane was there in Japan and rode this mare, the role started from there and came to here, it was super important. I think I mentioned a few times that I was here when Kingston Town won back in 1982, so I finally came back home to win a Cox Plate and it meant a lot to me” winning trainer Yoshito Yahagi said after the race.

The journey to the Cox Plate started when Lys Gracieux won the Takarazuka Kinen (2200m) at Hanshin with Lane in the saddle way back in June. The 25-year-old was smitten with the horse from then on, and will now enjoy a share in the $5 million prize-money.

Lys Gracieux was followed by Castelvecchio, who ran a brave race to finish second. Craig Williams did a great job sitting up on speed midway through the race as Richard Litt’s three-year-old colt capped off 2019 with a placing at Group 1 weight-for-age level after winning the Group 1 Champagne Stakes at Randwick back in April.

“We’re very proud of him, he’s come a long way, it’s his eighth start or ninth start today so we’ve got a lot to look forward to. I’d like to see him in the paddock and bring him back in the Autumn” one of Litt’s unnamed stable representatives told Racing.com after the race.

Crowd favourite Te Akau Shark also lost no admirers running third. Like Castelvecchio, the stable was delighted with the effort of the five-year-old Kiwi gelding.

“He got left a little bit flat-footed down the side and decided to stay in which was the difference between running third and midfield, so we’re on the up.

Magic Wand, who was also well supported in the market, ran on strongly for fourth. Tasmanian hopefully Mystic Journey was not far behind in fifth.