An emotional Chris Waller was on hand at Rosehill on Saturday as his prized four-year-old gelding Kolding won the inaugural $7.5 million Golden Eagle (1500m).

The Kiwi import was well supported in Ladbrokes’ market after drawing barrier 4 earlier in the week and did not disappoint with this year’s Everest winner Glen Boss on board. The pair had plenty of work to do late with Sunlight drawing clear, but after a brief freshen up between runs, Kolding’s turn of foot once again did the talking.

Kolding won on debut at Group 1 level last month claiming the Epsom Handicap (1600m) in a memorable victory at Randwick. Boss retained the ride on Saturday and left little doubt as to why the horse is now regarded as one of the best milers in the country. 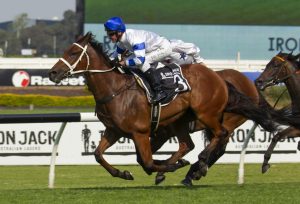 Glen Boss added another trophy to his mantelpiece on Saturday by claiming the first-ever Golden Eagle aboard Kolding. Photo Credit: Steve Hart.

“Wow, that was some race. In the middle it was ridiculously slow it was almost dangerous. J Mac almost fell beside me it was so slow” Boss said after the race.

“I’d almost given up to be honest because of the speed in the race. I thought ‘I should have been more positive’ or ‘I should have made them work a bit more’, all these things were going through my head.

“But then you just straight away switchback, you’ve got a job to do.

Sunlight was outstanding on Saturday after pushing forward on the first turn to lead from Brutal. Many queried the step up in trip, but the three-time Group 1 winner lost no admirers falling just short of what would have been a massive boilover.

Kolding chased down Sunlight after bursting clear at the 100m mark and didn’t look back. Waller has won many famous races in Sydney, but he didn’t rule out heading to Melbourne in the future.
“He hasn’t finished yet. You can’t come back for another Golden Eagle but maybe he’ll be there for a Cox Plate next year or a Queen Elizabeth, who knows?” Waller said.

There was no such luck for race-favourite Arcadia Queen, who drove through early before failing to run a place. The slow speed didn’t help James McDonald as the pair got a little too keen in the middle stages.

Mizzy made up plenty of ground on the rails to run a handy third, while Behemoth’s top-four finish didn’t go unnoticed.