Shadow Hero had no problem finding daylight at Rosehill on Saturday to claim the Group 3 Gloaming Stakes (1800m).

Mark Newnham’s three-year-old showed plenty of improvement second-up after running third in the Dulcify a fortnight ago, and now looks destined for a date with the Group 1 Victoria Derby at Flemington on November 2.

The colt by Pierro took a similar path to stablemate Celestial Falls, who won second-up over 1800m in Wednesday’s Kennedy Oaks Trial.

“His demeanour will take him a long way; he’s so relaxed everywhere. I think Josh (Parr) was a little worried when he rode him on Tuesday that he was a little too relaxed for him,” Newnham said.

The blinkers certainly proved the trick as Parr coaxed Shadow Hero over the line under hands and heels. After establishing a spot on the rails early, the champion jockey had very little work to do as the horses turn of foot did the rest. 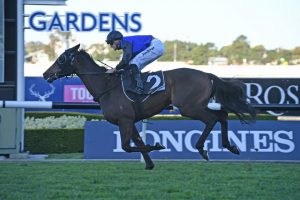 “He’s a bit like Pierro in that sense, you put the blinkers on and he turns into a superhero” Newnham went on to say.

Shadow Hero spent time up in Queensland earlier in the year as Newnham tried to adapt to his horse to traveling.

Parr said after the race he was convinced in Shadow Hero’s ability, especially after showing tremendous improvement fitness-wise.

“Convincing is a very good way to describe it. He is a class above these horses today” Parr said.

“I’m lost for words. Obviously, this horses ability has been very well known for some time. We were a little unsure of what level he could get to, but he’s just demolished them over 1800m and he could go again.”