Alizee showed plenty of toughness to claim another Group 1 victory in the 2019 Futurity Stakes at Caulfield this afternoon. 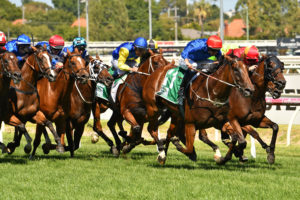 Alizee was too tough for her rivals in the Futurity Stakes. Photo by: Ultimate Racing Photos

There was a surprise in the early stages of the Futurity Stakes as Hugh Bowman elected to settle Alizee in the first half of the field and she was forced to do plenty of work.

Bowman rode Alizee with plenty of confident and put her right into the race at the top of the straight, but was strongly challenged by veteran galloper Malaguerra.

Alizee was eventually able to wear down Malaguerra and she held-off stablemate Hartnell and Land Of Plenty to make it four victories on the trot.

Bowman admitted after the race that he did not have a great deal of luck on Alizee, but he was full of praise for the four-year-old mare and is confident that she will be even better over a mile in the All Star Mile.

“She is a class animal,” Bowman said.

“She had an extended break and James has bought her along nice and steadily for this preparation and she hasn’t left a stone unturned.

“She has come to Melbourne for the first time this preparation and she certainly lived up to her runs in Sydney.

“I hope to ride her in the All Star Mile.

“We haven’t made that call yet and we wanted to get through today and see how she went.

“I didn’t have a great deal of luck from the awkward draw and she had to make her own luck.

“I thought she sustained her run to the line really well and if she gets a better run she will be more dynamic than that over a mile.”

Trainer James Cummings could only admire the toughness that Alizee showed in the concluding stages of the Futurity Stakes and he confirmed that all attention will now be focused on the All Star Mile at Flemington in three weeks time.

“She is a beauty and she is just in ripping form,” Cummings said.

“That is four wins straight and a deserving way to win another Group 1.

“They don’t hand them out and that is probably the toughest I’ve seen a horse of mine ever win a Group 1.

“She has just been able to absorb the pressure and when ridden for a turn-of-foot she can be even better.

“They are wonderful qualities for a horse, to be so versatile and still be able to fend off Group 1 weight-for-age horses.

“It is a special horse to have in the barn.

“It definitely wasn’t pretty, but we will look back and see that the moves that Hugh made were the right ones.

“She is in outstanding form heading into the All Star Mile.”