Ability, class and talent proved the difference for Melody Belle at Flemington on Saturday as Jamie Richards’ prized mare claimed not only her 10th Group 1 win, but also her fourth in a row.

Punters never strayed from the favourite backing her into $3.80 odds with Ladbrokes.com.au. Plenty queried the quality of the five-year-old’s wins in New Zealand, but the Kiwi galloper proved no match for a very talented field of Australian milers in the Empire Rose Stakes (1600m).

The pace was on early as Miss Siska led from Amphitrite. Melody Belle’s wide draw meant jockey Opie Bosson had plenty of work to do, but the Kiwi flew home out wide to run down the leading Aristia to win by a length and a quarter. 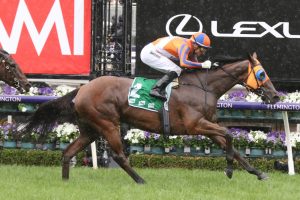 No one around the world has won more Group 1’s than Melody Belle, making Saturday’s win even more remarkable as she returned to Australia in style. The mare by Commands failed to run a place last time out at Randwick in the Group 1 Surround Stakes early last year but showed the same turn of foot we’ve come to expect from across the ditch.

“When the rain come I was even more confident, I just love her to bits, she doesn’t know when to stop” Bosson told Racing.com after the race.

“I thought I got there too soon, I thought we might start laboring. But to her credit she can keep up a good strong gallop.”

Melody Belle had won over 58% of her starts heading into the Empire Rose and placed in 70%. Saturday’s $600,000 win also puts her over the $2 million mark in career earnings.

“She’s a great mare and the opposition she’s been beating in New Zealand might have been a little bit questionable, but she can only beat what’s in front of her and she’s been doing it really well” winning trainer Jamie Richards said.

“She sort of hadn’t spent any petrol and watching at the half mile there she was traveling well enough and improving her spot. She’s so versatile, she can go back, relax and finish off, or she can use her barrier and race handy if she draws a gate.”

We are beside ourselves with pride as Melody Belle claims the Group 1 Empire Rose @FlemingtonVRC our extraordinary mare bought by David Ellis records her 10th Group 1 – sorry guys we are so so emotional❤️❤️@opie_bosson @JamieRichards3 pic.twitter.com/XCGM5n0R8X

Aristia saw out the trip well to run a strong second after running out of gas at the 150m mark.