The Kris Lees-trained Sixties Groove had all the good form leading into the Group 2 $400,000 Lexus Brisbane Cup (2400m) at Eagle Farm and finally broke through for a deserving win in the time-honoured event. 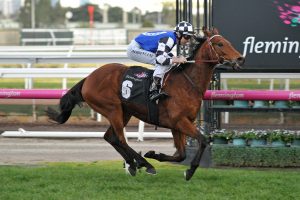 Without Kenedna there to rain on his parade in the last on Straddie Day, Sixties Groove was dominant on the Good (3) track handing jockey Damien Oliver with his third Brisbane Cup success.

Oliver first won the race back in 1999 on Sheer Kingston and saluted again on subsequent Melbourne Cup winner Viewed in 2008 for the late, great Cups’ King Bart Cummings.

The second elect in betting, Sixties Groove rewarded Lees for his wonderful preparation of well-placed runs and owner Jamie Lovett described the result as a “big thrill.”

“Yeah, big thrill. It’s on the bucket list. Bigger thrill to win it with Kris Lees, good mate, we’ve got a lot of horses with Kris,” he told Brisbane Racing Club.

“It was the race that we targeted the whole way through.

“He ran terrific in the O’Shea, it was a terrific run in the Doomben Cup and obviously this was his target.

Oliver had the eventual Brisbane Cup winner settled third last the rails as the $201 outsider Sir Barnabus led the field around.

Coming up to the home turn Sixties Groove started to make up ground, Oliver looking for a way through on the straight.

He eventually burst through the centre chasing down Sopressa who had dashed to the lead momentarily.

Grey Lion was racing all over the place, but a brilliant ride by Kathy O’Hara saw her switch hands with the whip to balance the galloper and get him home for second in a massive run.

Second last throughout the run, the fellow Lees-trained Big Duke improved on his PJ O’Shea eighth last weekend carrying the equal 58kg top-weight in the Brisbane Cup from the wide barrier to make up late ground and run third.

There was a little bit of post-win concern for Sixties Groove with Oliver jumping off and saying the horse had pulled up sore, but Lovett said the horse was fine and named the Group 1 Caulfield Cup (2400m) on October 19 as the big spring target next preparation.

“He hasn’t gone amiss. To be fair to the horse these firmer tracks – he’s obviously a European horse – I think he might be a little bit jarry. So Ollie just said ‘I took the precaution to jump off’.

“I think he could be a Caulfield Cup horse, we’re hoping.”