The 2018 Tancred Stakes Day results will be updated all afternoon at horseracing.com.au and we are excited for what will be a massive afternoon of racing. 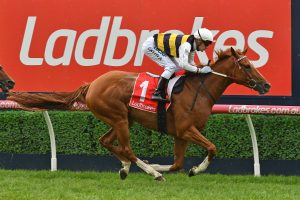 In somewhat of a rarity, the rain has stayed away from Sydney in the lead-up to a big day of racing and we are set for perfect conditions at Rosehill Gardens this afternoon.

The Tancred Stakes is the feature race of the day and it is Ranvet Stakes winner Gailo Chop ($2.80) that is a narrow favourite in the betting market with [ladbrokes], but there has been a huge move for 2016 Melbourne Cup winner Almandin and he is now into $3.

The Vinery Stud Stakes is the other Group 1 event on the card and Chris Waller-trained Unforgotten ($4) is a narrow favourite, but there has also been money for Aloisia ($5), Alizee ($6), Bring Me Roses ($8) and Danzdanzdance ($8.50).

There is plenty of interest in every race on the Tancred Stakes card as we build towards The Championships and you can stay up to date with all the results at horseracing.com.au!

Irukandji will likely back-up in the Sires Produce Stakes at Royal Randwick next weekend following a tough victory in The Schweppervescence at Rosehill Gardens this afternoon.

Irukandji looked like a sitting duck as Spin loomed on his outside at the 300 metre mark, but the Team Snowden-trained colt refused to run straight and was unable to get past Irukandji.

The win of Irukandji gave Dundeel his first black-type win as a sire!

Arbeitsam led from start to finish to record a typically gallant win in the 2018 Neville Sellwood Stakes at Rosehill Gardens this afternoon.

Tim Clark took Arbeitsam straight to the lead in the early stages of the Neville Sellwood Stakes and he ensured that the race was run at a genuine tempo.

Maurus charged at Arbeitsam, but the front-runner had done enough to hold off his rival and score a strong win.

Spright flashed down the outside to record an impressive win in the 2018 Star Kingdom Stakes at Rosehill Gardens this afternoon.

Veteran sprinter Dothraki kicked clear at the top of the straight and looked as though he could make it two wins on the trot, but Spright showed a most impressive turn-of-foot.

Spright will likely have her next race start in the Hall Mark Stakes at Royal Randwick in a fortnight.

Prompt Response will go into the Queen Of The Turf Stakes as one of the leading contenders after she recorded a tough win in the 2018 Emancipation Stakes at Rosehill Gardens this afternoon.

Damien Oliver was happy to settle Prompt Response just outside the lead in the early stages of the Emancipation Stakes and that proved to be a winning move.

Oregon’s Day and Dixie Blossoms charged at Prompt Response, but she was able to cling-on to claim victory.

Levendi will back-up in the Australian Derby next Saturday after he recorded a tough victory in the Tulloch Stakes.

Levendi returned to a semblance of his best form to finish second behind Cliff’s Edge in the Alister Clarke Stakes and he was able to go one better in the Tulloch Stakes.

Astoria hit the front at the 300 metre mark and looked as though he would be tough to get past, but Levendi was able to get his nose in front in the shadows of the post.

Almandin outstayed his rivals to return to winning form in the 2018 Tancred Stakes at Rosehill Gardens this afternoon.

Lasquesti Spirit was eventually able to find the lead and she ensured that the race turned into a genuine staying contest.

That played right into the hands of Almandin and he was able to finish over the top of Gailo Chop and Ambitious to claim a second Group 1 win in Australia.

An outstanding ride from Michael Dee helped Hiyaam capture a maiden Group 1 in the 2018 Vinery Stud Stakes at Rosehill Gardens this afternoon.

Dee took Hiyaam straight to the front in the early stages of the Vinery Stud Stakes and he was able to get the filly into a lovely rhythm.

Unforgotten charged home in the final stages of the race after getting a long way back, but Hiyaam never looked like getting run down.