Maid Of Heaven stormed home in the concluding stages to record a memorable win in the 2018 Spring Champion Stakes at Royal Randwick this afternoon. 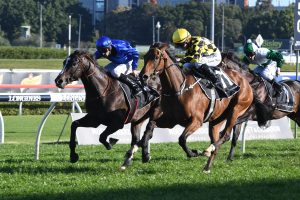 There was drama in the lead-up to the Spring Champion Stakes as well-backed favourite Thinkin’ Big had to be reshoed before the start of the race and it continued once the barriers open when the favourite was caught wide.

Thinkin’ Big hit the front at the top of the straight, but it was clear that his tough run in transit had taken its toll and that Aramayo and Maid Of Heaven would fight out the finish.

Aramayo looked as though he had the race won, but Maid Of Heaven kept lifting and she hit the front in the shadows of the post to deliver both Mark Newnham and Rachel King their maiden Group 1 wins.

Newnham tasted plenty of Group 1 success during his time as Foreman for Gai Waterhouse, but Maid Of Heaven’s win in the Spring Champion Stakes was his first Group 1 win as a trainer in his own right and he was clearly over the moon.

“That last 50 metres I had my heart in my mouth.

“I didn’t know whether she’d get there, but the last two strides got us over the line.”

“It has been 2½ years since I got a licence and it is nearly the second anniversary of the first winner, so to the people who have supported thanks for everything.

“I think we’ll see her to the paddock in her first preparation.”

King timed her run to perfection on Maid Of Heaven to claim her first Group 1 win, but the modest hoop was quick to pay credit to the training performance of Newnham and was delighted to repay his faith in her.

“All credit to Mark (Newnham) and his team.

“We thought we were both in with a chance of getting our first Group 1 last weekend (in the Flight Stakes), but we managed to do it this weekend.

It couldn’t have happened for a better trainer.

“He was at Gai’s when I first started there.

“Mark gave me a big push to start riding over here and have a go.

“He has never stopped supporting me the whole way through.

Maid Of Heaven is unlikely to head to the VRC Oaks and Newnham indicated that she will head to the spelling paddock.