Redkirk Warrior made history by becoming the first horse since Razor Sharp in 1983 to win the Newmarket Handicap in back-to-back years. 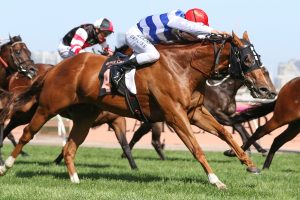 Jockey Regan Bayliss elected to take Redkirk Warrior to the outside rail and he settled him much closer to the speed than he did in the Black Caviar Lightning Stakes.

Brave Smash emerged from the pack on the inside rail and he looked like he had the race won, but Redkirk Warrior once again lifted in the final 100 metres to record a memorable victory.

Bayliss paid credit to the Lindsay Park team for making the decision to take Redkirk Warrior to the outside rail and the promising hoop was clearly delighted to have claimed another Group 1 win on the talented sprinter.

“I am just so blessed to have found a horse like this so early on in my career,” Bayliss said.

“This is my third Group 1 and he keeps defying history this horse.

“He was the first horse to win the Newmarket Handicap first-up in 100 years and now he has won it in back-to-back years.

“It just shows you the scope of this animal.

“David’s instructions were just perfect – we knew that the inside was the place to be and we rolled the dice by going to the outside.

“He just travelled beautifully in the run and he was there to be beaten, but good horses don’t give in.”

Co-trainer David Hayes was always confident that Redkirk Warrior would run well in the Newmarket Handicap and he declared after the race that the imported galloper is the best straight horse that he has ever trained.

Redkirk Warrior has been invited to the United Kingdom for the Royal Ascot meeting, but Hayes said that he is still unsure whether he wants to travel the Newmarket Handicap winner.

“He is a wonderful horse and we were very confident that he would run a mighty race,” Hayes said.

“He was the horse that everybody had to beat, but he had to lump that weight.

“We will just see how he pulls up.

“He has been invited to Royal Ascot and we might go there, but he loves Lindsay Park so much that I half don’t want to travel him either.”

Neither Brave Smash or Merchant Navy lost any admirers with their performances in the Newmarket Handicap and they filled the placings, with the top three clearing out from the rest of the field.