It was a Godolphin double as Benbatl upstaged Blair House to record a fighting victory in the 2018 Ladbrokes Stakes at Caulfield this afternoon. 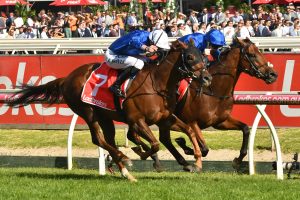 Benbatl went to the front in the early stages, but Homesman ended up taking up the running and Benbatl received a lovely run in transit.

Blair House loomed on the outside at the top of the straight and he looked as though he would be able to get past Benbatl, but he kept on fighting to record his third Group 1 victory in as many countries.

Benbatl is the highest-rated horse that has ever come to Australia to race and he will now go into the Ladbrokes Cox Plate at The Valley as the major threat to the great mare Winx.

Trainer Saeed Bin Suroor was delighted to win with what was his first runner in Australia since Beautiful Romance won the 2016 edition of the Zipping Classic and he confirmed that Benbatl will take on Winx in the 2018 Ladbrokes Cox Plate.

“I wasn’t sure that the ground would suit him and I could see that in his action, but the way that he finished his race was really well.

“He is looking perfect to run two weeks later in the Cox Plate.

“Sheik Mohammed has always been a great supporter of Australian racing and he sends his best horses to Australia.

“Winx is the best of the best, but it has been the plan since January to run the horse in the Cox Plate.

“We will see how he goes, but she is a star.

“He looks really well and his condition is fantastic.”

Benbatl is now into $18 in the [ladbrokes] Cox Plate betting market and he is now on the second line of betting behind the great mare Winx.

The Chris Waller-trained duo of D’argento and Unforgotten were both well-backed ahead of the Ladbrokes, but neither were able to get into the race and their Spring Racing Carnival campaigns are now at a crossroads.