Gallant Perth raider Man Booker boosted his prize money earned up over a million dollars thanks to an Ipswich Cup Day win in the Listed $175,0000 Eye Liner Stakes (1350m) win in Queensland. 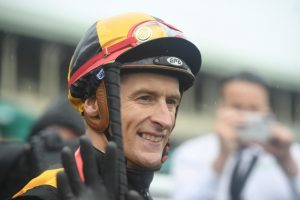 Jockey Blake Shinn capped off an excellent winter in Queensland riding Man Booker to victory in the 2019 Eye Liner Stakes at Ipswich.

The Daniel Morton-trained Discorsi six-year-old was four runs into his winter raid on the sunshine state.

He finally broke through with an interstate victory in the feature sprint after three unplaced Group 1 runs in Brisbane rewarding the patience of Morton.

“Obviously we came for the big Group 1s and that didn’t work for us but it’s a neat consolation prize,” Morton, who is best known in Queensland for dual Doomben Cup winner Scenic Shot, said.

“I’ve been very happy with him the whole way along.”

Back down in grade the horse relished the easier company and handled carrying the 59kg top-weight to a neck win over $61 roughie Astoria, who gained an eleventh hour run as the first emergency, in the Eye Liner Stakes results.

“He’s come over from the west with some really nice form,” Shinn, who has enjoyed the dividends after basing himself in in Queensland for the festival, said post-win.

“He’s contested the best horses in the Queensland Carnival.

“He produced a great performance. We drew wide, we had a great run and I’m just delighted to get the win for Dan.

“It’s been a really enjoyable six weeks basing myself up here.”

Morton confirmed plans to return to Western Australia with Man Booker who will spell ahead of the Perth Summer Racing Carnival later in the year.

“We’ll put him aside now, just give him a nice lead-up to our summer carnival,” he said.