The 2018 Australian Guineas Day results will start rolling through shortly and we are set for a big afternoon of racing at Flemington. 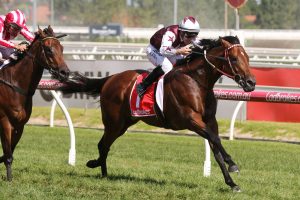 Cliff’s Edge is currently on top of the 2018 Australian Guineas betting market with Ladbrokes. Photo by: Ultimate Racing Photos

The Australian Guineas is always a strong race and that is the case again in 2018 as a capacity field of quality three-year-olds, which makes for a very competitive betting race.

There is no doubt that the Australian Guineas is the highlight, but there are still some quality gallopers going around in the Bob Hoysted Handicap, Frances Tressady Stakes and the Roy Higgins Quality.

Nomothaj remains on a Golden Slipper path following her win at Flemington this afternoon. Photo by: Ultimate Racing Photos

Nomothaj held-on in the final stages to record a tough victory in the 3AW Is Football Stakes at Flemington this afternoon.

Mark Zahra settled Nomothaj just outside the lead in the early stages of the race and the head-start she had on the backmarkers proved to be the difference late.

The Lindsay Park team were delighted to see Nomothaj return to winning form and the Golden Slipper remains a potential target for the two-year-old.

Aloft defied a better drift to return to the races with a win in the 2018 Roy Higgins Quality at Flemington this afternoon.

They absolutely crawled in the early stages of the Roy Higgins Quality and that played right into the hands of Aloft.

He always looked to have his rivals covered and he was simply able to outsprint his rivals in the final stages of the race.

Hear The Chant justified a big betting move to record an impressive win in the 2018 Mitty’s Handicap at Flemington this afternoon.

Punters back Hear The Chant from $4.60 into $3 and that money proved to be spot-on as she was in control of the race a long way from.

Godolphin mare Fragonard was a big drifter in betting, but she was still able to find the line fairly to finish second.

Oregon’s Day was extremely well-backed ahead of the Frances Tressady Stakes and she looked like the winner at the 250 metre mark, but simply wasn’t able to run down Flippant.

The win was Flippant’s first since she took out the MSS Security Sprint at Flemington on Melbourne Cup Day in 2016.

Big Sur outstayed his rivals to win the 2018 JDRF Australia Handicap at Flemington this afternoon.

Big Sur went into the race with only two wins from his ten race starts, but he clearly relished the step-up to 2000 metres and he raced away from his rivals in the final stages of the race.

Luke Nolen timed his ride to perfection on Big Sur, but was quick to pay credit to the training performance of Colin Little.

Nozomi returned to the races with an upset win in the Autumn Handicap at Flemington this afternoon.

Punters were stunned when Nozomi won at massive odds first-up in 2017 and while he wasn’t at as big a price today, he was still unwanted by punters.

German import Poetic Dream went into the race as a clear favourite and cruised up to his rivals, but didn’t let down when he was asked for an extra effort.

An outstanding ride from Damien Oliver helped Grunt record an impressive win in the 2018 Australian Guineas.

Oliver slotted Grunt in nicely from the wide barrier draw as Cliff’s Edge ensured that the race was run a genuine tempo.

It was a battle between Grunt, Peaceful State and Bring Me Roses as Cliff’s Edge tired and it was Grunt that proved the toughest in the final stages.

Secret Agenda returned to the races with a fast-finishing win in the Bob Hoysted Handicap at Flemington this afternoon.

Damien Oliver was happy to settle Secret Agenda at the tail of the field and she received a lovely trail into the race.

It took her a while to run down It’s Wesley, but Oliver had timed his run to perfection and Secret Agenda grabbed her rival in the shadows of the post.

Scarecrow held off a fast-finishing Muraahib to win the final race at Flemington on Australian Guineas Day.

Luke Currie gave Scarecrow an outstanding run in transit and it took him a while to wind-up, but he was eventually able to knuckle down and get the job done.

Muraahib flew home in the final stages and ran impressive closing sectionals, but left his run too late.