Tosen Stardom claimed a maiden Group 1 victory with an outstanding win in the 2017 Toorak Handicap at Caulfield this afternoon. 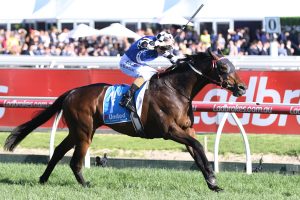 The Japanese galloper flew under the radar heading into the Toorak Handicap – despite running a nice race in the Sir Rupert Clarke Stakes – and he finally put it altogether to score his first win in Australia.

Damian Lane peeled Tosen Stardom out at the top of the straight and he showed an excellent turn-of-foot when asked for an extra effort to finish over the top of his rivals and cruise to a Toorak Handicap victory.

Lane revealed after the race that his plan was to ride Tosen Stardom aggressively in the early stages of the Toorak Handicap and he said that he was full of confidence when he felt how much horse he had underneath him coming into the straight.

“Darren said to me today that there was no point going too far back because he is cherry ripe for today, so I bit the bullet and tried to put him in a spot,” Lane said.

“He didn’t have much speed early, but I was really travelling coming into the straight and he really let go with a good turn of sprint.

“I thought he got there a little bit early as he can be prone to waiting for other horses, but to his credit today he attacked the line.

“Full credit to Darren and all his team – they had him cherry ripe on the day.”

Darren Weir and owners Australian Bloodstock have been desperate to win a Group 1 event with Tosen Stardom and his win in the Toorak Handicap now ensures that he will head to stud at the conclusion of his racing career.

Weir had already taken out the Group 1 Ladbrokes Stakes with Gailo Chop, but it was clear that the Toorak Handicap win of Tosen Stardom meant a great deal to him.

“It was important – he is a beautiful type of horse and he has the pedigree to back it up and now he is a Group 1 winner,” Weir said.

“It is a great result all around.

“It has been frustrating and we haven’t had the best of luck with him, but this preparation we have been able to get a few runs into him and that was key for today.”

The Lindsay Park team rounded out the placings with both Sovereign Nation and Petrology at monster odds.