Aloisia snuck up on the inside to record an upset victory in the 2017 Thousand Guineas at Caulfield this afternoon. 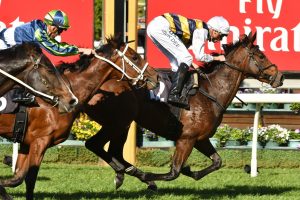 Aloisia, pictured winning at Flemington, took out the Thousand Guineas at Caulfield this afternoon. Photo by: Ultimate Racing Photos

The market suggested that the Thousand Guineas was a two horse race between Shoals and Alizee and that looked to be the case at the top of the straight, but Luke Nolen pinched plenty of ground on the rail on Aloisia and she responded strongly when asked for an extra effort.

Alizee loomed dangerously on the outside, but Aloisia was far too strong and she was able to deliver trainer Aaron Purcell a maiden Group 1 victory.

Nolen gave Aloisia an absolutely ideal run in transit, but the talented hoop was quick to pay credit to the training performances of both Purcell and Ciaron Maher.

“It is really good and I am very excited,” Nolen said.

“Congratulations to Aaron on his first Group 1 and Ciaron, who had the job with this filly.

“I’m glad I got the opportunity to ride her today.

“She had the perfect run, so hopefully I’ll continue to keep the ride for the rest of this campaign.”

Aloisia was originally trained by Ciaron Maher, but Aaron Purcell took over the role after Maher received a six-month suspension for his whole in the Azkadellia ownership saga.

Purcell was clearly overwhelmed to have claimed a maiden Group 1 victory so early in his stint in charge of the Maher stable and he said that a great deal of the credit for Aloisia’s Thousand Guineas win belonged with the suspended trainer.

“To have my first Group 1 winner – things couldn’t be going better,” Purcell said.

“It is just such a team of horses, a great team of staff and the owners are just fantastic.

“Everything has been so straightforward since we have been there and everybody knows their job.

“It makes life so much easier and I am happy to be here, but it is such a team effort.

“Ciaron left the stable in great shape – the horses had their plans, they were set in a certain way and everything has just fallen into place.”

The Group 1 Crown Oaks (2500m) was the major target for Aloisia at the start of her 2017 Spring Racing Carnival campaign and she will continue to head in that direction.

Shoals produced another game performance to finish a close second behind Aloisia, while Alizee was unable to replicate her Flight Stakes effort in third.