An excellent ride from jockey Dean Yendall helped Shoals record a maiden Group 1 victory in the 2017 Myer Classic at Flemington this afternoon. 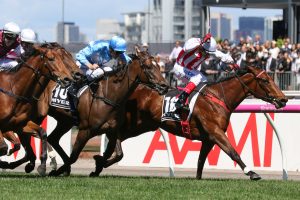 Shoals held-off a host of rivals to record a tough win in the 2017 Myer Classic. Photo by: Ultimate Racing Photos

Yendall won the 2016 Myer Classic on three-year-old filly I Am A Star and he elected to replicate the exact same tactics he used in that race on Shoals in the 2017 edition of the Group 1 event.

Shoals settled outside the leader Global Glamour in the early stages of the race and Yendall sent the talented filly for home at the top of the straight.

Yendall admitted after the race that he probably went for home a little bit too early on Shoals and she did look like a sitting duck when Eckstein and Dixie Blossoms came at her late, but it proved to be a winning move and Shoals delivered him a second straight win in the Myer Classic.

Yendall said that he enjoys riding three-year-old fillies at weight-for-age level against the older horses and he was clearly delighted to have recorded another Group 1 victory.

“I like riding these little fillies and my stature suits them,” Yendall said.

“They barely know I am on top of them until I actually say hey hey let’s go.

“I got crossed over and I elected to sit off Timmy Clarke (on Global Glamour) and we travelled really sweetly.

“I probably pushed the button a little bit early, but I knew I had a seven kilo weight difference on the rest of them and I used that to our advantage.

“I was able to kick clear and hold them off late.

“It was a massive effort.”

Shoals finished second behind the talented Aloisia in the Thousand Guineas and she was deserving of a maiden Group 1 victory in the Myer Classic.

Trainer Anthony Freedman was typically reserved after the Myer Classic victory, but he was clearly pleased that the decision to press forward on Shoals had paid dividends.

“That was very satisfying,” Freedman said.

“We were always going to go forward and take any bad luck out of play.

“We used the weight advantage and it was pretty much the same ride that he rode last year on the winner.

“She is very tough.”

Eckstein was only narrowly denied a maiden Group 1 victory, while Dixie Blossoms made up plenty of ground late to sneak into the placings.