The 2017 Melbourne Cup field has been released and 24 of the best stayers in the world ‘the race that stops a nation’ at Flemington on Tuesday afternoon. 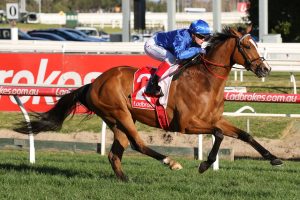 Hartnell will carry the top weight in the 2017 Melbourne Cup. Photo by: Ultimate Racing Photos

Hartnell finished a gallant third in the Melbourne Cup last year and he will carry the top weight of 57.5 kilograms in the 2017 edition.

It has been a mixed preparation for Hartnell – he won the P.B. Lawrence Stakes and ran second in the Makybe Diva Stakes and the Underwood Stakes before he failed to fire in the Ladbrokes Stakes.

Another horse that comes into the Melbourne Cup on the back of a flat effort is last year’s winner Almandin, who has the chance to become the first horse since Makybe Diva to win the Melbourne Cup in back-to-back years.

Almandin went straight to the top of Melbourne Cup betting following his impressive victory in the JRA Trophy, but he was beaten as a short-priced favourite in The Bart Cummings and he hasn’t been seen at the races.

Lloyd Williams owns a further three horses in the Melbourne Cup field and also has Johannes Vermeer, US Army Ranger and Rekindling in the race.

Johannes Vermeer has not put a foot wrong since arriving in Australia and he finished a close second behind Gailo Chop in the Ladbrokes Stakes before he finished an unlucky third in the Caulfield Cup.

US Army Ranger and Rekindling will both make their Australian racing debuts in the Melbourne Cup and will be the first-ever Melbourne Cup runners for Joseph O’Brien – the son of legendary trainer Aidan O’Brien.

No international horse has won the Melbourne Cup without having a lead-up run in Australia since Vintage Crop in 1993 and there are a number of horses that will attempt to emulate that feat in 2017.

Max Dynamite is back for another crack at the Melbourne Cup following his second place finish behind Prince Of Penzance in the 2015 edition of the race, while he is joined in the race by stablemate Thomas Hobson.

The internationals that have already had a race start in Australia this preparation are Marmelo, Wall Of Fire and Wicklow Brave.

Marmelo went to the top of 2017 Melbourne Cup betting markets following his fast-finishing effort in the Caulfield Cup, while Wall Of Fire flew home to finish second in the Ladbrokes Herbert Power Stakes and that has proven to be a very strong form race.

Humidor ran in the Caulfield Cup as well, but he really stamped himself as a leading Melbourne Cup contender when he finished second behind Winx in the Ladbrokes Cox Plate.

The Darren Weir-trained galloper was a touch disappointing in the Caulfield Cup, but he could hardly have been more impressive when he gave Winx a serious challenge in the Australasian Weight-For-Age Championship.

Who Shot Thebarman is one of the few last start winners in the 2017 Melbourne Cup field following his win in the Moonee Valley Gold Cup and he is joined in the race by stablemate Libran, who chased him home in the Group 2 event.

The final place in the 2017 Melbourne Cup field went to Cismontane after he recorded a very tough victory in the Lexus Stakes at Flemington this afternoon.

The 2017 Melbourne Cup barrier draw will be held at the conclusion of the Victoria Derby Day meeting at Flemington this afternoon.