The 2017 George Main Stakes Day results will be updated all afternoon at horseracing.com.au and we could not be more excited to see Winx in action once again. 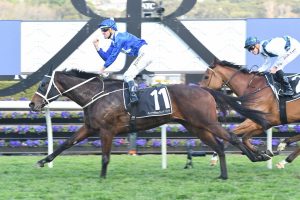 Winx will chase another Group 1 victory in the 2017 George Main Stakes. Photo by: Steve Hart

Winx has been tested in both her race starts during her 2017 Spring Racing Carnival campaign to date, but she will still start the George Main Stakes as a very short-priced favourite and she is expected to record her 20th race win.

The George Main Stakes is the obvious highlight, but there are plenty of other big races set to take place this afternoon.

The Shorts has drawn some of the best sprinters in the country – including the resuming Chautauqua – and the Heritage Stakes, Bill Ritchie Handicap, Tea Rose Stakes and the Kingston Town Stakes are also packed full of quality.

Visit horseracing.com.au throughout the afternoon to keep up to date with all the 2017 George Main Stakes Day results!

Larlabrook led from start to finish to record a very narrow win in a thrilling edition of the Highway Handicap.

Greg Ryan took Larlabrook straight to the front in the early stages of the Highway Handicap and he kicked clear when he was asked for an extra effort at the top of the straight.

Larlabrook got very tired in the last 50 metres and She Knows and Undaoaf dived at him late, but Larlabrook managed to hold-on to record the biggest win of his racing career to date.

Embley returned to winning form with an impressive victory in the Shoot Out Mile at Royal Randwick this afternoon.

Jason Collett took Embley straight to the front in the early stages of the Shoot Out Mile and he was able to control the race from the outset.

Darci’s Affair and Gold Horizon made up some ground late, but Embley never looked like being beaten.

Viridine made it three wins from as many starts with a strong win in the 2017 Heritage Stakes at Royal Randwick this afternoon.

Malahat took up the running in the early stages of the race and looked as though he would be tough to beat, but Viridine quickly picked him up at the top of the straight and ran away from his rival when asked for an extra effort.

Single Bullet had no luck in running whatsoever and he ran on strongly for second when he eventually found clear running.

Comin’ Through held-off Tom Melbourne to win the 2017 Bill Ritchie Handicap at Royal Randwick this afternoon.

Comin’ Through hit the front at the 200 metre mark, but he had a serious fight on his hands as Burning Passion challenged him on the inside and Tom Melbourne came home strongly on the outside.

The challenge seemed to help Comin’ Through  focus on the job at hand and he held-off his rivals to record his second win on the trot.

Alizee finished over the top of her rivals to win the 2017 Tea Rose Stakes at Royal Randwick this afternoon.

Champagne Cuddles and Tulip looked as though they were going to fight out the finish, but Glyn Schofield timed his run to perfection on Alizee and she showed an impressive turn-of-foot to score the biggest win of her racing career to date.

The Group 1 Flight Stakes (1600m) is on the agenda for Alizee, but there are concerns over whether she will run out a strong mile.

Winx made it 20 wins on the trot with a typically impressive win in the 2017 George Main Stakes at Royal Randwick this afternoon.

Hugh Bowman settled Winx in the second half of the field and Bowman was asking her for an extra effort a long way from home.

It look a long time for Winx to work into the race and Happy Clapper went with her when she sprinted, but her final 200 metres was outstanding and she ran away from her rivals late.

Redzel made it four wins on the trot with another impressive performance in the 2017 The Shorts at Royal Randwick this afternoon.

Ball Of Muscle took up the running in the early stages of The Shorts and Hugh Bowman was happy to let Redzel trail the leader into the race.

Redzel took a while to get past a gallant Ball Of Muscle, but the Snitzel gelding was too strong in the final 100 metres.

Chautauqua was a long way back in the early stages of the race and he was never able to get into the finish, but he still found the line very strongly.

Libran stormed home in the final 100 metres to take out the 2017 Kingston Town Stakes at Royal Randwick this afternoon.

Antonio Giuseppe hit the front at the 150 metre mark and looked as though he had the race won, but Libran exploded from the pack in the final stages to claim an upset win.

Libran’s win was his first since the 2016 Sydney Autumn Racing Carnival and he will go into The Metropolitan as a leading contender.

Roughie Isorich has won the final race on 2017 George Main Stakes Day by the bob of a head from Improvement.

Jockey Lee Magorrian allowed the horse to stride forward after jumping well and immediately took up the running; setting a reasonable tempo for the field of thirteen.

Locking in a fierce sprint battle with Improvement in the final straight, the Choisir gelding continued to fight to the line and secured his ninth career win.