Merchant Navy came from nowhere to record a stunning victory in the 2017 Coolmore Stud Stakes at Flemington this afternoon. 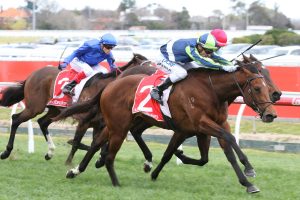 Invincible Star took up the running in the early stages of the Coolmore Stud Stakes and she responded strongly when she was asked for an extra effort from jockey Stephen Baster at the 300 metre mark.

Formality looked like the only danger to Invincible Star, but Merchant Navy absolutely rocketed when he found clear running and he ended up getting his nose in front in the shadows of the post for a simply outstanding win.

Jockey Mark Zahra admitted after the race that he thought Merchant Navy had too much work to do to run down Invincible Star and he was clearly delighted with the way that the talented colt had savaged the line.

“I wasn’t quite sure whether I had got there or not,” Zahra said.

“I waited and let it all pan out and then I got to the inside and thought I was going to run out of time.

“Gee he was strong late.

“To not go to the Guineas, to put the blinkers on and drop back in trip was a great plan and a great training performance.

Aaron Purcell has taken over the stable of Ciaron Maher during the leading trainers suspension and the victory of Merchant Navy in the Coolmore Stud Stakes is his second Group 1 victory in less than a month.

Purcell was pleased that the plan to secure the breeding future of Merchant Navy had come off with a Coolmore Stud Stakes and he is still pinching himself after what has been a whirlwind couple of months.

“It is a stallion-making race and he is obviously a well-bred Fastnet Rock colt,” Purcell said.

“We came here hoping to turn him into a Group 1 winning sprinter and he has obviously done the job in great style.

“If things hadn’t gone the way they had I would probably be back at Warrnambool cheering Ciaron’s horses home, but I’ve come to Melbourne and I’ve got a great team of staff around me.

“Everything we have done so far has been good and hopefully it can continue for the next few months.”

Invincible Star lost no admirers with her simply brilliant performance, while Formality was able to complete the placings in third.